ROPA Tiger 6S - greatly improved efficiency paired with digital networking in the most powerful sugar-beet lifter worldwide from the leader in the market.

ROPA adds the Tiger 6S to its range of self-propelled sugar-beet lifters. It will be in series production in time for the 2020 harvest. After several years of field testing, pilot models are already in operation in parts of Europe for the 2019 season. A new generation of extremely high-performance computers forms the telematics centre with predictive analytics, online diagnostics and partially autonomous sugar-beet harvesting. The Tiger 6S now occupies the premium segment in the market and with its advanced computer architecture it is considerably more than the technical and visual continuing development of the current Tiger 6.

The new image of the ROPA Tiger 6S symbolises digitalisation and Agriculture 4.0. The light-blue line shows and represents the networking of the Tiger internally and externally with the R-Connect online portal. The new product logo is based on the smooth geometric shapes of the low poly style. The play of light and shadow gives the Tiger 6S even greater depth and dynamic. The striking colouring with dark-grey outside contours harmonises with the pale aluminium grey and bright yellow. The Tiger is designed for pride in ownership, to arouse emotion and at the same time to meet the promise of quality. 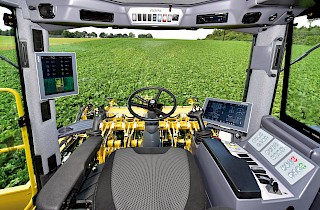 The panoramic view from the cabin gives a generous feeling of space and it is the centre of artificial intelligence and partially autonomous sugar-beet lifting. The operator's position in the Tiger 6S is the visual expression of leadership in technology and the breakthrough into a new era of networking in the sugar-beet harvest. Operation at the terminal with interactive buttons highlighted by clear colour design on the modern flat design is even more intuitive and follows the same logic as with tablets and smartphones. Readability and usability is improved with targeted contrast.

In comparison with the Tiger 6, the Tiger 6S has two 12.1 inch operating terminals with high pixel density resulting in even sharper resolution. In addition to the machine functions, the camera images can also be displayed on the terminal on the left A-pillar. The Tiger 6S is the first sugar-beet lifter anywhere that is fitted with digital cameras as standard equipment. The image quality of the digital cameras is significantly better, and an additional Ethernet network is integrated into the machine to handle the resulting greatly increased volumes of data. The relevant camera image is automatically displayed on the left terminal during reversing or when unloading the bunker. The unloading conveyor and the bunker unloading can be controlled even more conveniently from the new ergonomic control element on the left armrest. Five function buttons on the right multifunction joystick can be customised, for example with the wide-area window wiper.

The standard integrated telematics module is the basis for proactive Service 4.0, particularly for predictive analytics and fast assistance and diagnostics if service is required on any continent. If service is required, the service technician can link directly to the terminal and the machine controller to assist the driver with resolving the problem. The R-Connect portal is the perfect tool for drivers and managers to use for online order processing and for optimisation of machines and fleets. 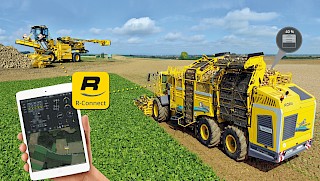 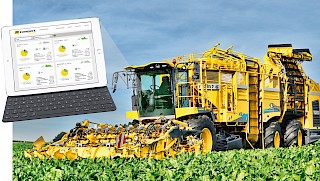 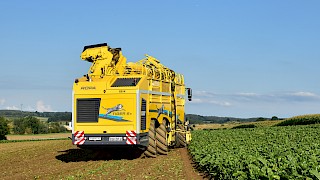 Just as the tiger walks lightly through the jungle on velvet paws, the Tiger 6S is equally light-footed in the field during the sugar-beet harvest. The R-Soil Protect hydraulic chassis system with slope compensation and roll stabilisation, which has received several awards, has been further developed in the Tiger 6S. The Tiger 6S also has a 3-axis gyroscope with acceleration measurement for centrifugal force compensation for even finer regulation of the tilt.

Like its predecessors, the Tiger 6S has, as a unique selling proposition in the market for 3-axle harvesters, direct power transmission via direct linear cardan shafts from traction drive to both rear axles and the front axle. This guarantees the best possible traction even in variable or difficult soil and harvesting conditions. The drive is stepless from 0 to 40 km/h with reduced engine speed.

The new "intelligent main steering switch" automatically synchronises the articulated and front-axle steering for travel on the road.

Many new convenient and useful details

Numerous new developments and optimised features offer additional benefits and comfort for drivers and operators of the Tiger 6S. For example, the machine is fully equipped with even more powerful LED lights, direction indicators and flashing beacons, optimised battery layout, a new design for the central electrical system, optimised working hydraulics for depth guides and cleaning units, a new machine controller that complies with current safety guidelines, greater ease of service for electrical and hydraulic systems. 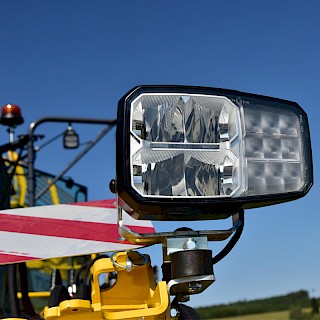 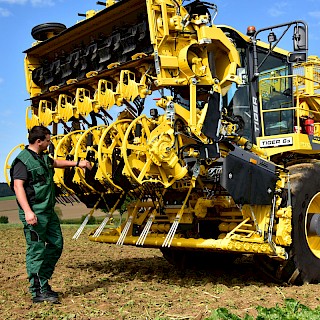 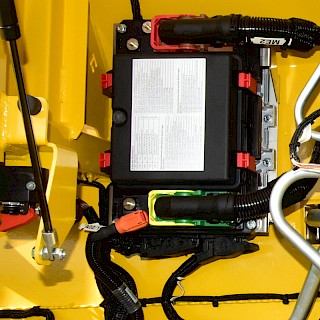 As in the Tiger 6, ROPA uses the reliable and economical Volvo six-cylinder inline engines for the Tiger 6S. ROPA offers the following engines, depending on the requirements and national regulations: 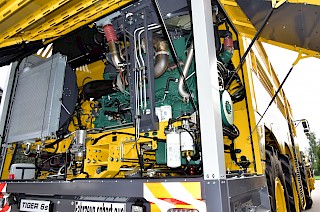 With a capacity of 16.12 litres and pump-nozzle injection (PDE), this engine is the familiar and reliable power pack used in the Tiger 6. This engine does not require AdBlue, SCR cat or exhaust gas recirculation. A powerful maximum torque of 3260 Nm is efficiently transmitted by the stepless traction drive at optimal efficiency. 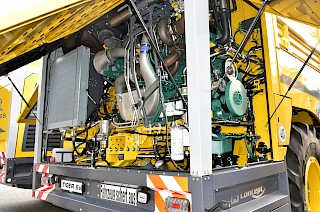 Volvo Penta has designed this engine specifically for operation in the Tiger 6S. With 16.12 litre capacity, common rail injection, SCR catalytic converter and AdBlue, this engine type delivers its energy even more efficiently and is much cleaner.

This powerful package with its dual turbochargers generates a huge maximum torque of 3650 Nm. At only 1000 rpm it already generates 3550 Nm, enabling the machine to save fuel and lift beets longer in the low speed range. With its modern technology this diesel engine complies with EU5 emission category even without exhaust gas recirculation.

The Tiger 6S will be introduced as a production model at Agritechnica 2019 and will be available for purchase. Pre-production models are already in operation for the 2019 sugar-beet harvest. Particularly with the more powerful on-board electronic system and the far-reaching networking ROPA looks forward to the potential for even faster and optimised development of driver assistance systems, including with reference to the partially automated sugar-beet harvest. 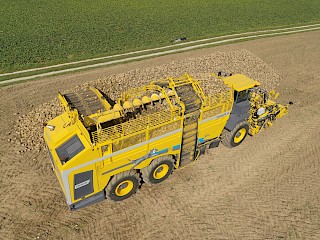 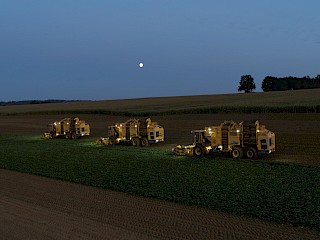